Judges & The 5 Finalists For the 2017 Welcome Home Contest

The time has come to select a welcome home 2017 winner!

THE JUDGES PICKED: ASHLEY VENTIMIGLIA AS THIS YEAR’S WINNER!
SEE THE OFFICIAL ANNOUNCEMENT ON FACEBOOK HERE.

Lis from Above All Masonry first went to visit the Signore Family of Miller Place. This family is trying to pick up the pieces after tragically losing their son, a beautiful 14 year old boy who was struck by a car while riding his bike. “Nico was the one who knew how to get me right in the heart” said Kim as she shared a memory of her son and how he would still at the age of 14 hug and kiss her. Nico was loved by all in his community. “He was the kid that would never leave others out…he played with everyone”.

The Signore Family have a space in their yard where Nico’s puppy had been buried. Nico loved animals and the family thought it would be a perfect space to honor Nico and help the family heal.

The TSS caused sepsis of Ashely’s organs. She was intubated and put in a medically induced coma. While in this coma Ashley’s body was turning a dark purple, almost black. The pressers in her body were trying to keep the vital organs alive while killing off what was “not important” . Several toes on both feet had to be amputated and a portion of her forearm was severely damaged. She had to deal with this realization upon waking from her coma still fighting for her life. Once stabilized she was transferred to a rehab facility from Oct – Dec 2013 to “learn” how to walk again. The doctors were able to save her big toes and that is what helps her keep her balance and still walk.

After all this her fight was not over. She has so much damage to her organs from the TSS she has since been hospitalized multiple times for surgeries or complications from the surgeries. Sometimes months at a time. In August of 2014 she had to have a Vagotomy (a surgery where they collapse your lungs and cut the vagus nerve right next to your esophagus and heart) in order to lower the production of acid in the stomach. She now has a central line in her arm for medications and fluids, a feeding tube and a 24 hour glucose monitor for diabetes.

Ashley has lost so much time with her 2 small children (now 4 and 7), all she wants is to be able to spend as much time as she can with her little ones. And be able to do some of the simple everyday things we all do. The healing space to them will hopefully be just that….a space where Ashley can heal and make up the time she has missed enjoying her children.

Ashley is scheduled to have another follow up surgery on her feet in the next few months. When she was asked what has kept her going through all she has been through, she answered “My kids…I have two babies and I will fight for them”.

A story of the Hanson family, Kimberly, Rob and their 2 beautiful children, Kevin 12 years old and Katie 10 years old is a story of strength and survival. Kevin, who was born with a heart condition called Aortic Stenosis, and had a heart procedure to open up his valve, is a happy well rounded pre-teen. He will need to have another corrective procedure when he gets older and his body stops growing. Katie is a beautiful young lady very into the arts. Katie was diagnosed with a non malignant brain tumor at the age of 3. She received chemotherapy and the tumor is now stabilized. Although the tumor did leave her completely blind in one eye, that does not stop Katie from doing what she loves. She plays the cello and participates in productions in their local theater.

Kimberly (Mom) was cheery and grateful as she told her story of how she is now recovered from a double mastectomy and reconstructive surgery. She said the strength her daughter taught her got her through her tough chemotherapy treatments. It’s inspiring to see that after all they had been through, they are in a good and healthy place today. They would love a nice space to enjoy quality time as a family in their new dream home.

A story of Linda McMahon of Holbrook and how she lost the love of her life is heartbreaking. She and her late husband Marty had been high school sweet hearts. They build their life together, raised their daughter, and were now preparing to enjoy their new grandchild. In 2010 the family was getting ready for Marty’s retirement party. Marty had been a volunteer firefighter for many years and was now ready to retire. The day before the party Marty passed a way from a heart attack.

The shock of Marty’s passing has caused a devastating sadness to the family. Recently Linda lost her job of over 20 years with Pathmark and due to back issues was forced to retire. The financial difficulties is just another strain on the extremely depressed Linda. She feels she can not keep up with the home on her own and their once beautifully landscaped yard looks sad and abandoned. Linda was hoping to use the healing space to honor her late husband.

Kim and Daniel Kennelly’s adorable 4 year old son Phillip was born with a rare liver disease called Biliarry Atresia (there is no full cure for this disease). At 8 weeks old, Phillip had surgery to temporarily fix the problem and was then put on a list for a transplant in 2015. In 2016 Phillip had a second GI Bleed and was in need of a transplant sooner than expected and the doctors suggested the family look into a living donor. Daniel volunteered to be the first one tested and he was a match! They both went in to surgery in May 2016 and have both recovered beautifully and are doing great. Phillip is a fun loving active little boy. It was thrilling to see how well he and his father Daniel were doing.

It is obvious that Daniel will do anything for his family no matter what he may have been going through himself. Last month Daniel’s brother and best friend lost a long battle with Hodgkins Lymphoma. His brother was a firefighter and a 911 first responder. They would love the healing garden to represent the new healthy future of their little Phillip as well as a place to honor Daniel’s late brother.

Don’t miss out! Sign up for an update, just once a month, right to your email. 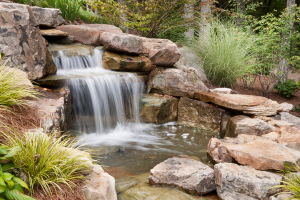 How to Build a Backyard Waterfall: A Step-by-Step Guide 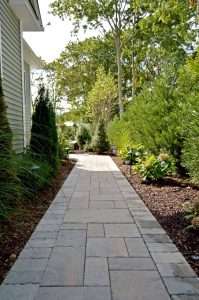 The Best Mulch Options for Your Landscaping Beds 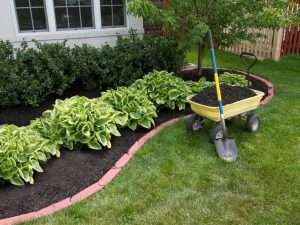 Mulch: What It Means, How It’s Used in Landscaping

© 2021 Above All Masonry Design + Outdoor Living

Tell us more about your project.